27th October (week 3): Ryan Samaroo (Bristol)
‘The principle of equivalence as a criterion of identity’

Note that the seminar on Thu 28th is a joint seminar with the Jowett Society, and takes place at the changed time and place of 5.30 p.m., T. S. Eliot Lecture Theatre, Merton College. 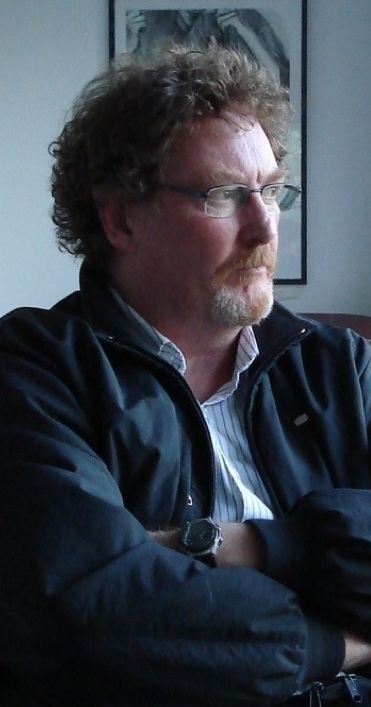 Conference in Honour of Harvey Brown at 65

The following seminars will take place at 4.30 p.m. on Thursdays, weeks 2-8 ( note that there is no seminar week 1) in the Lecture Room of Radcliffe Humanities, Radcliffe Observatory Quarter, Woodstock Road, Oxford OX2 6GG.

Thu 7th May (week 2): Mauro Dorato (University of Rome Roma Tre)
The passage of time between physics and psychology

The following seminars will take place at 4.30 p.m. on Thursdays, weeks 1-8, in the Lecture Room of the Philosophy Centre.

Thu 8 May (week 2): Simon Saunders (Oxford):
Reference to indistinguishable particles, and other paradoxes

‘The Structure of Gravity and Space-time’ is an international workshop, at Lady Margaret Hall, Oxford. Attendance is by invitation only.

Slides and audio files will be posted in due course.

The following seminars will take place at 4.30 p.m. on Thursdays, weeks 1-8, in the Lecture Room of the Philosophy Centre.

How does the classical world emerge from microscopic quantum evolution?

Symmetry and Evolution in Quantum Gravity

An Informational Approach to Identical Particles in Quantum Theory

Thu 1 May (week 1 of TT): Oliver Pooley (Oxford):
New work on the problem of time 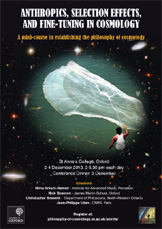 This mini-course will be about fine-tuning and anthropic reasoning in cosmology: about the variability of physical constants, the consequences of such variations, and how to compensate — and recalibrate probabilities accordingly — for the fact that the observations that we make are necessarily of a region in the universe in which their values make our existence possible.

The lectures on Tuesday 3rd December will be followed by a conference dinner at St. Anne’s at 7.00 p.m., with a talk by Nima Arkani-Hamed.

Attendance of the lectures and workshop is free, but registration is required, as space is limited.

Register now for the mini-course

Register now for the workshop

Purchase (£25) a place at the conference dinner

You can find accommodation at Oxford Rooms.

All seminars are in the BIPAC room, Denys Wilkinson Building, at 2.15